On July 30th, Kathy Truesdell from Mad Science
presented Lights! Color! Action! at the Brundage Community Branch Library. Using the Newton's color wheels they built themselves, participants were able to see how white light really is made up of all the colours of the rainbow!
Posted by Jessica at 11:44 AM No comments:

Email ThisBlogThis!Share to TwitterShare to FacebookShare to Pinterest
Labels: Programs 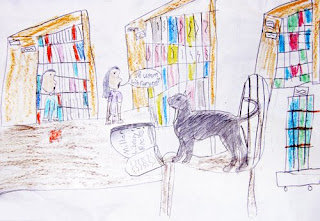 The Circulation Department would like to thank Emily Valin for her gift. She had just received her Hamden library card, and she drew this picture in appreciation.

Posted by Jessica at 2:50 PM No comments: 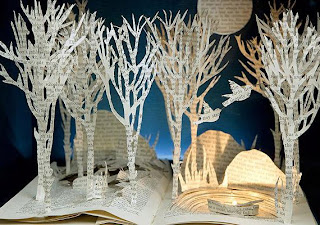 The Telegraph recently published an article on artist Su Blackwell, who takes used books and turns them into sculptures.
Using only illustrations and paper from the book itself, Blackwell carefully cuts and slices until she has created her work of art. Though she at first felt some remorse about cutting up books, she eventually realized her work would give the books a new life.
"I began feeling guilty about cutting up the books but I had the integrity that I would create something magical from it. My reasoning is that half of the books have been sat on shelves for years anyway, or that they were about to be thrown away and destroyed forever."
Click the links below to read the Telegraph article, or to see more of Blackwell's work.
Amazing artworks created from old books (The Telegragh)
Su Blackwell
Take a look at our catalog for information on Altered Books and Artists' Books.
Posted by Jessica at 10:18 AM No comments: 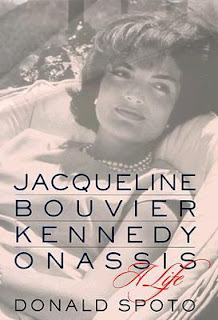 Jackie Kennedy would have turned 80 today, July 28. She was born in Southampton, NY on July 28, 1929. She was the widow of John Fitzgerald Kennedy (35th president of the US). She became First Lady at age 31. The widely admired and respected former first lady died May 19, 1994.
The National Museum of American History in Washington D.C. has an ongoing exhibit titled "First Ladies at the Smithsonian". It showcases objects from the first ladies collection. There is also a link to a "behind-the-scenes-tour" with curator Lisa-Kathleen Graddy.
Posted by Elisabeth at 8:02 PM No comments: 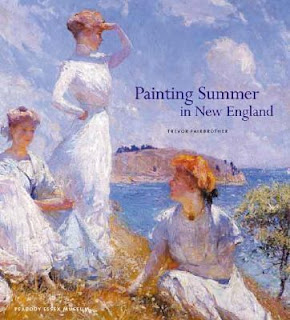 Hamden residents with a valid Hamden library card can check out our State Parks and Forests Day Pass which covers the cost of parking at 139 Connecticut state parks and forests, including the four state park beaches on Long Island sound. This pass is checked out on a first come first serve basis and cannot be reserved.
Keep your family safe this summer by following the summer safety tips from the American Academy of Pediatrics.

Posted by Elisabeth at 7:03 PM No comments: 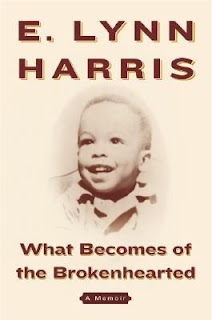 The prolific American author E. Lynn Harris passed away on July 23, 2009 at the age of 54. Ten of his novels appeared on the New York Times Best Seller list. He won the James Baldwin Award for Literary Excellence for his novel IF THIS WORLD WERE MINE. Harris also wrote a memoir WHAT BECOMES OF THE BROKENHEARTED. For more information on Harris, read the obituary by Bruce Weber which was published in the New York Times. An update from the New York Times of July 31, 2009 says that E. Lynn Harris died of heart disease.
Posted by Elisabeth at 5:01 PM No comments: 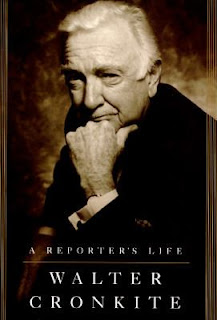 Mr. Cronkite was the anchorman for CBS evening news from 1962-1981, a position which made him the "most trusted man in America".
He once said: "I can't imagine a person becoming a success who doesn't give this game of life everything he's got."
See the obituary by Douglas Martin which was published in the New York Times.
Posted by Elisabeth at 4:06 PM No comments:

Email ThisBlogThis!Share to TwitterShare to FacebookShare to Pinterest
Labels: Books, Displays, In Memoriam 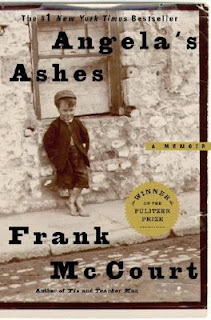 Frank McCourt died Sunday, July 19, 2009 at the age of 78. He is best known as the author of "Angela's Ashes" which was published in September 1996 and spent 117 weeks on the New York Times Bestseller list. Frank McCourt taught English and creative writing in the New York City public schools for twenty-seven years. He was 66 years old when he published his first book "Angela's Ashes". "All I had was this story. It took me two years and all my life to write it." The story of his poverty stricken Irish childhood sold more than 4 million copies worldwide and was translated into 20 languages. It was also turned into a movie in 1999.
Posted by Elisabeth at 4:05 PM No comments: 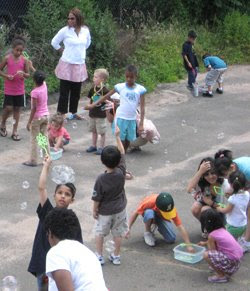 Everyone had a great time at our Bubbleology program on July 14th! Folks from the Whitney Water Center presented a program on the physical properties of bubbles, then the kids were able to see science in action by creating their own bubbles!
Posted by Jessica at 1:40 PM No comments:

Email ThisBlogThis!Share to TwitterShare to FacebookShare to Pinterest
Labels: Programs 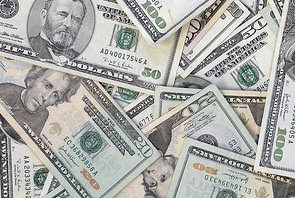 Looking to ways to make your money go farther? Come to the library! Instead of buying small mountains of books, CDs, DVDs and even magazines that you'll only use once, check them out at the library instead.

Take a look at our Library Value Calculator and see what you could be saving with your library card.
Posted by Jessica at 4:12 PM No comments:

Email ThisBlogThis!Share to TwitterShare to FacebookShare to Pinterest
Labels: Services 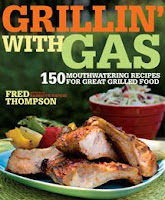 It finally feels like summer has arrived! And what better way to celebrate the season than to fire up the grill! Check out one of these great new books on grilling:


Grilling with Gas by Fred Thompson
Serious Barbecue: Smoke, Char, Baste, and Brush Your Way to Great Outdoor Cooking by Adam Perry Lang
Emeril at the Grill: A Cookbook for All Seasons by Emeril Lagasse
BBQ Bash: The Be-All, End-All Party Guide, from Barefoot to Black Tie by Karen Adler and Judith Fertig
Big Bob Gibson's BBQ Book: Recipes and Secrets from a Legendary Barbecue Joint by Chris Lilly
Bobby Flay's Grill It! by Bobby Flay

You can search our catalog for more books on barbecue cooking.
Posted by Jessica at 3:26 PM No comments:

The Wonderful World of Fashion

There is something new to discover this month in our large exhibit case in front of the staircase. We have selected some of our most beautiful fashion design books:

Parisiennes: A celebration of French Women, Nineteenth Century Fashion in Detail, Balenciaga and his legacy, Red Carpet: 21 Years of Fame and Fashion, Lanvin. Do not miss it - stop by and take a look. 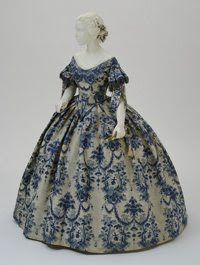 Our display was inspired by an exhibit at the Philadelphia Museum of Art: Shopping in Paris: French Fashion 1850-1925.
It is on view through October 25, 2009 in the Spain Gallery at the Museum's Perelman building. The exhibit includes 35 garments and accessories, along with photographs and film clips from the early 20th century. The Perelman Building Library will present an accompanying exhibition: Something to Wear: Fashion in Print 1950-1925.

Posted by Elisabeth at 3:52 PM No comments: 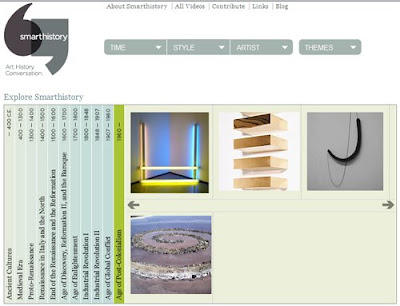 Smarthistory.org is a free multi-media web site designed as a dynamic enhancement (or even substitute) for the traditional art history textbook. It uses audio guides, podcasts, and videos to create interactive exploration of eras, styles, and artists.
Winner of the Webby Award for Best Education Website, 2009
Posted by Jessica at 10:42 AM No comments: