We have some exciting new updates for our Hamden OneClickDigital service! First, Mac users running OS 10.6 or higher may now install the OneClickDigital Media Manager, available through the Mac app store. This will allow Mac users access to our ENTIRE downloadable audiobook collection! And stay tuned - we're told a mobile app is in the works, so you will soon be able to download audiobooks directly to your mobile devices.

The following DVDs have been recently added to our collection or are on order. The titles are linked to our online catalog. They can be checked out for 7 days. 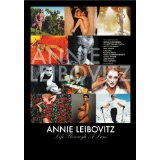 Annie Leibovitz: Life Through a Lens. Directed by
Barbara Leibovitz.

Profiles the celebrity photographer from her Connecticut childhood to her current work for Vanity Fair. Originally broadcast on television as an episode for the PBS series "American masters" in 2006. 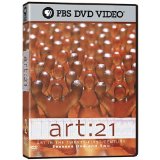 Meet diverse contemporary artists through revealing profiles that take viewers behind the scenes into artists' studios, homes, and communities to provide an intimate view of their lives, work, sources of inspiration and creative processes. 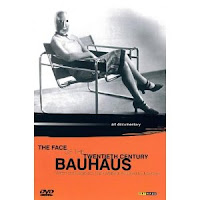 Bauhaus: The Face of the 20th Century. Written and narrated by Frank Whitford ; producer, Julia Cave.
Looks at the development of the Bauhaus and at the key figures involved in it, including the founder Walter Gropius, his successor Mies van der Rohe, Lásló Moholy-Nagy and Josef Albers. The program also sets the history of the Bauhaus in the context of the political unrest and economic chaos of the Weimar Republic in Germany. Former students discuss their time at the Bauhaus and architect Philip Johnson tells how it influenced his work. Contains rare archival footage of the Bauhaus at Dessau and looks at the architecture of Chicago, much influenced by Mies van der Rohe, who emmigrated there after the Bauhaus was shut by the Nazis in 1933. 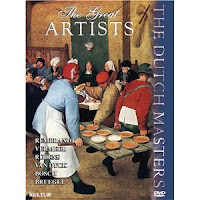 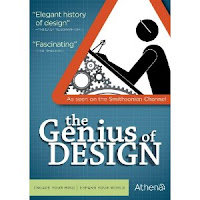 The art, science and development of design and how people are impacted when interacting with what has been designed are explored in five episodes. 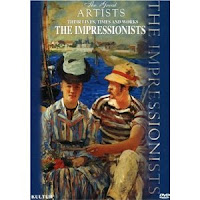 The Impressionists: their lives, times and works. 6 DVDs.

An in-depth look at the lives of six artists of the Impressionist movement. Monet -- Degas -- Renoir -- Pissarro -- Seurat -- Manet. 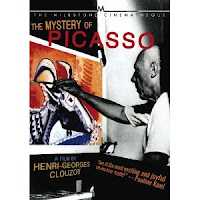 The Mystery of Picasso. A film by Henri-Georges Clouzot. Originally released as a motion picture in 1956.

Explores the mind and motivations of Pablo Picasso as he creates over fifteen works before the camera. Using a specially designed transparent 'canvas' to provide an unobstructed view, Picasso creates as the camera records. He begins with simple works that take shape after only a single brush stroke. He then progresses to more complex paintings, in which he repeatedly adds and removes elements, transforming the entire scene, until at last the work is complete. 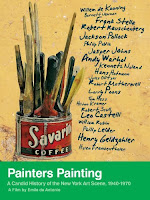 Painters Painting: a candid history of the New York art scene, 1940-1970. A film by Emile de Antonio and Mary Lampson. Originally produced in 1972.

Artists, critics, and patrons discuss post-war art in New York City against the backdrop of footage of the Metropolitan Museum of Art's exhibition "New York painting and sculpture, 1940-1970. 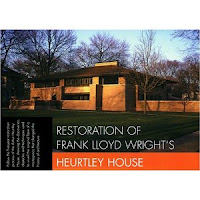 The Heurtley House is located in Oak Park, Illinois, a suburb of Chicago. Frank Lloyd Wright constructed the house in 1902. 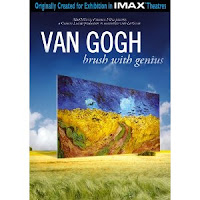 Van Gogh: a Brush with Genius. Directed by Francois Bertrand.

Bertrand takes the viewer into the heart of van Gogh's paintings and life. His letters are used to explain his art. The locations that inspired him are also part of the film. 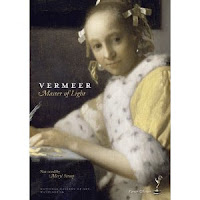 Explores Vermeer's paintings, examining his techniques of lighting and composition.


Posted by Elisabeth at 8:31 PM No comments:

Jeffrey Zaslow, an award winning American author, journalist and columnist, died Feb. 10, 2012 in a car accident in northern Michigan. Returning from a book signing event, he lost control of his car on a snow covered road and was hit by a tractor-trailer. He was 53 years old. He is survived by his wife and three daughters. Zaslow also co-authored best-selling books with Randy Pausch, Gabrielle Giffords, and Captain Chesley Sullenberger.There is an article by Tara Parker-Pope in the print edition of the New York Times, today, February 14, 2012, "Life's Frailty, and the Gestures that go a long way" in which she remembers her friend Jeffrey Zaslow and the important lessons he taught her.

The Last Lecture. By Randy Pausch with Jeffrey Zaslow. 2008.

The author, a computer science professor diagnosed with terminal cancer, explores his life, the lessons that he has learned, how he has worked to achieve his childhood dreams, and the effect of his diagnosis on him and his family.

The Magic Room: A Story about the Love we wish for our Daughters. By Jeffrey Zaslow. 2012.

The New York Times bestselling journalist and author of The Girls from Ames , Jeffrey Zaslow, takes us to a multi-generational family owned small-town bridal shop called "Becker's. Run by the same family for years, Becker's has witnessed transformations in how America views the institution of marriage; some of the shop's clientele are becoming stepmothers, or starting married life for a second time.

Highest Duty. My Search for What Really Matters. By Captain Chesley "Sully" Sullenberger with Jeffrey Zaslow. 2009.

On January 15, 2009, the world witnessed one of the most remarkable emergency landings in aviation history when Captain Chesley "Sully" Sullenberger skillfully glided US Airways Flight 1549 onto the surface of the Hudson River, saving the lives of all 155 aboard. HIGHEST DUTY reveals the important lessons Sully learned through childhood, in his military service, and in his work as a commercial airline pilot. A few weeks after the crash, Sully discovered that he had lost a library book about professional ethics, Just Culture: Balancing Safety and Accountability, in the downed planes cargo hold. When he called the library to notify them, they waived the usual fees. Mayor Michael Bloomberg replaced the book when he gave Sully the Key to the City in a New York ceremony.

Gabby: A Story of Courage and Hope. By Gabrielle Giffords & Mark Kelly. With Jeffrey Zaslow. 2011.
As individuals, former congresswoman Gabrielle Giffords and her husband, astronaut Mark Kelly, showed Americans how optimism, an adventurous spirit, and a call to service can help change the world. As a couple, they became a national example of the healing power to be found in deeply shared love and courage. Their arrival in the world spotlight came under the worst of circumstances. On January 8, 2011, while meeting with her constituents in Tucson, Arizona, Gabby was the victim of an assassination attempt that left six people dead and thirteen wounded. Gabby was shot in the head; doctors called her survival "miraculous." As the nation grieved and sought to understand the attack, Gabby remained in private, focused on her against-all-odds recovery. Mark spent every possible moment by her side, as he also prepared for his final mission as commander of space shuttle Endeavour. Now, as Gabby's health continues to improve, the couple is sharing their remarkable untold story.

The Girls from Ames. A story of women and a forty-year friendship. By Jeffrey Zaslow. 2009.
From the co-author of the bestselling "The Last Lecture" comes a moving tribute to female friendships, with the inspiring story of 11 girls and the women they became.
Posted by Elisabeth at 6:44 PM No comments:

Email ThisBlogThis!Share to TwitterShare to FacebookShare to Pinterest
Labels: Authors, Books, In Memoriam 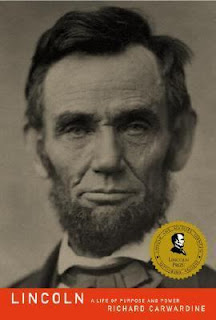 Lincoln's house in Springfield, Illinois, in Winter.
Posted by Elisabeth at 3:00 PM No comments:

Email ThisBlogThis!Share to TwitterShare to FacebookShare to Pinterest
Labels: History 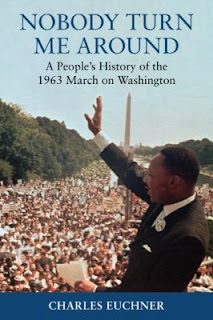 Celebrating Black History began in 1926, when Dr. Carter G. Woodson, a Harvard Ph.D., initiated "Negro History Week." Dr. Woodson, a historian, chose the second week in February because it included the birthdays of Frederick Douglass and Abraham Lincoln. In 1976, the Bicentennial (200th birthday) of the United States of America, the week-long observance was extended to the entire month of February in order to have enough time for celebratory programs and activities. Please see our book display in honor of Black History Month in front of the main staircase.


Books on African-American History in our collection
Statistical data for Black History Month
Profile America - Black History Month (a person for each day of the month)
Resource links from iconn.org (provided by Connecticut State Library)
Posted by Elisabeth at 2:52 PM No comments: 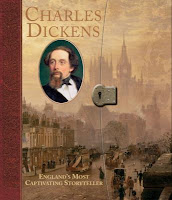 Charles Dickens was born 200 years ago, on Feb. 7, 1812.
When you come to the library this week, check out our display, or
click on these links to our online catalog to see what we have to offer on Charles Dickens.

Charles Dickens Exhibit at the Morgan Library and Museum in Manhattan


The Museum of London has created a free ipad and iphone app which takes users on a journey through the darker side of Charles Dickens' London.

Posted by Elisabeth at 7:43 PM No comments: 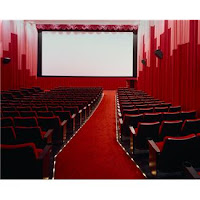 The 84th annual Academy Awards Ceremony will honor the best films of 2011. It will take place on Sunday, February, 26, 2012 at the Kodak Theatre in the heart of historic Hollywood, California. But the real winners this year are books! Eleven literary adaptations received recognition in major award categories. Six out of the nine best picture nominations are based on books. Cinema depends on literature, on the written word. Woody Allen's original screenplay for "Midnight in Paris" is a love declaration for the literary world of T.S. Eliot, Djuna Barnes, Gertrude Stein, Ernest Hemingway, F. Scott and Zelda Fitzgerald.

Don't just see the movies, read the books! Click on the book title for a link to our catalog, the statewide catalog, or worldcat.org.

Moneyball: the Art of Winning an Unfair Game. By Michael Lewis. (This author also wrote the source for the movie Blind Side)

My Week with Marilyn. By Colin Clark.

"Presents the author's diary accounts of the week he, an assistant on the set of the movie "The Prince and the Showgirl," bonded with Marilyn Monroe after she escaped the high-pressure set and toured the English countryside with him."


"Joey the horse recalls his experiences growing up on an English farm, his struggle for survival as a cavalry horse during World War I, and his reunion with his beloved master."

"Long out of print, George Moore's classic novella returns just in time for the major motion picture starring Glenn Close as a woman disguised as a man in nineteenth-century Ireland."


"Oskar Schell, the nine-year-old son of a man killed in the World Trade Center attacks, searches the five boroughs of New York City for a lock that fits a black key his father left behind."

"Traces the life of Britain's only female Prime Minister, Margaret Thatcher, from her upbringing in Grantham to her unexpected challenge to Edward Heath for leadership of the Conservative party and her eventual removal from power."

The Descendants. By Kaui Hart Hemmings.

"A descendant of royalty and one of the largest landowners in Hawaii, Matthew King struggles to deal with his out-of-control daughters--ten-year-old Scottie and seventeen-year-old Alex--as well as his comatose wife, whom they are about to remove from life
support."

The Invention of Hugo Cabaret: a novel in words and pictures. By Brian Selznick.

"When twelve-year-old Hugo, an orphan living and repairing clocks within the walls of a Paris train station in 1931, meets a mysterious toyseller and his goddaughter, his undercover life and his biggest secret are jeopardized."

The Help. By Kathryn Stockett.

"In Jackson, Mississippi, in 1962, there are lines that are not crossed. With the civil rights movement exploding all around them, three women start a movement of their own, forever changing a town and the way women--black and white, mothers and daughters--view one another."

The Girl with the Dragon Tattoo. By Stieg Larsson.